St Helena Cooking by Pamela M. Lawrence is the first ever traditional St Helena cookbook.  It is a beautiful book, filled with charm and insight into the island and its food at that time.  Unfortunately it is no longer in print and unavailable at the moment.  We have a well used original copy from Emma-Jane’s mum, complete with little annotations and notes added over the years.

Below is a detailed review of the St Helena Cooking book.  We go into detail, chapter by chapter, section by section.  At the end we have Emma-Jane’s video review.  You can also leave a comment about what you think. 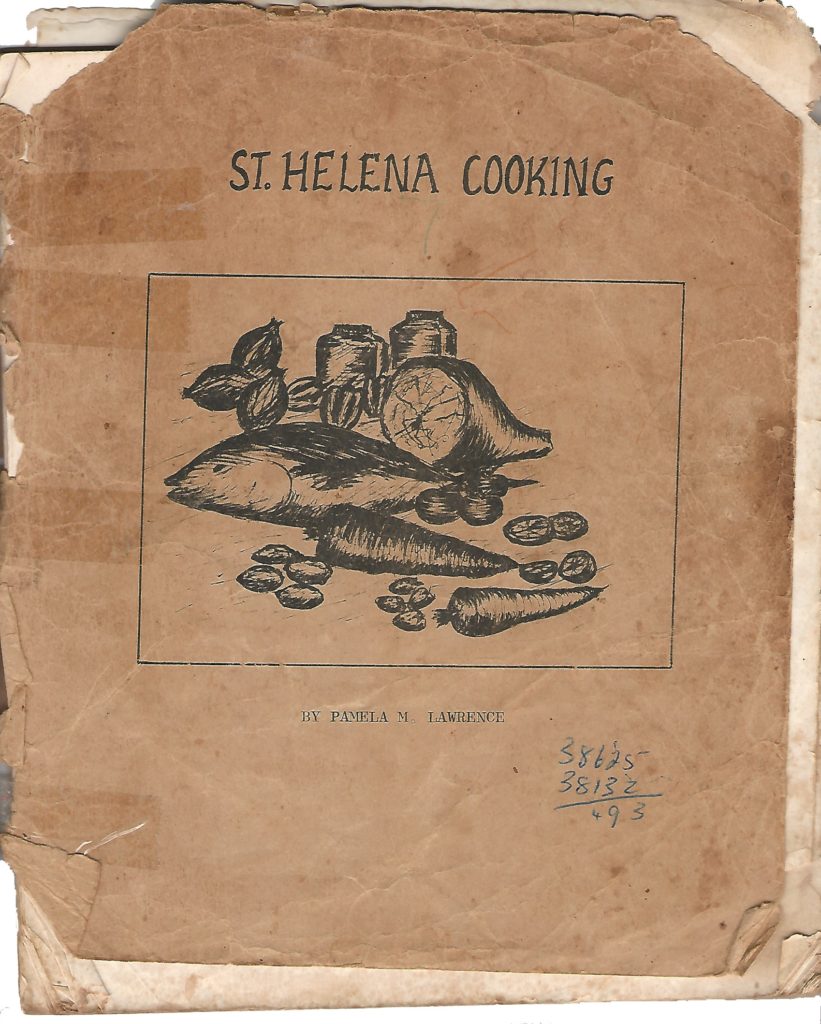 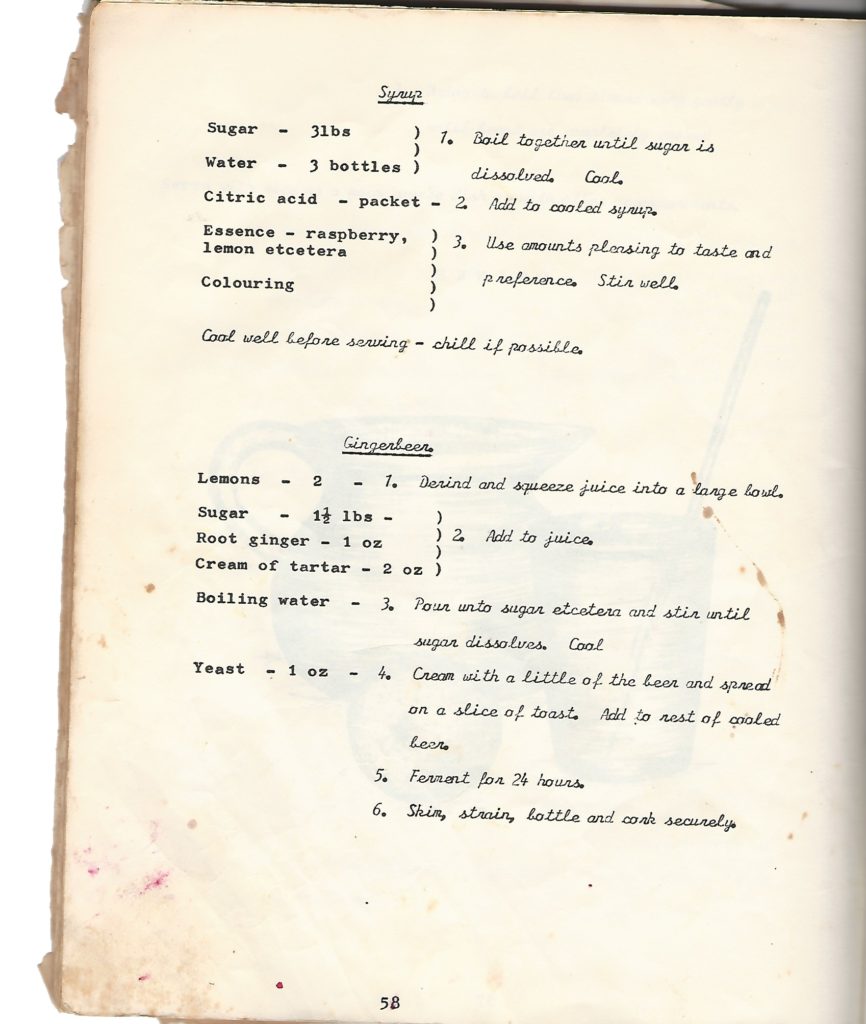 Dedicated to her daughter, Miss Lawrence breaks the St Helena Cooking book out into 4 chapters across 76 pages.  Published in 1984 by the Education Department, and printed at the Government Printing Office.  It begins with acknowledgements thanking the people who helped with the book (more on them later), the Education Department, Mrs Gillian Gough for doing the typing, Mr John Cranfield for the loan of his typewriter, and to Mr Eric Constantine for doing the delightful illustrations (which can see throughout this post).  Then there is a wonderful foreword by the then Chief Education Officer – Basil George, who mentions that Miss Lawrence is one of the few islanders who had studied and qualified in the UK as a teacher, before congratulating her for “putting together the first record of St Helena cooking “.

Is the introduction to St Helena Cooking.  We learn that it was published in 1984 to mark the 150th Anniversary of St Helena as a British Crown Colony.  Also the origins of the book as the St Helena Recipe Booklet complied by a group of sixth form pupils – Sandra Hudson, Marianne Musk and Glynis Stopforth, of St Helena Secondary Selective School as a post exam project.  With the objective of the book “to collect, as far as it possible, traditional St Helena recipes – those ‘hand-me-down-downs’ and ideas rather than contemporary, modernized variations.” As with all St Helena cooking the recipes are not intended to be conclusive , but reflect everyday dishes and St Helena specialities.

Other things of note within the introduction include some background about the island, with insights into life at that time.  The 1976 census is mentioned to illustrate an island population of 5,147 with an overseas population of about 150-200.  That “few basic foodstuffs such as flour and evaporated milk, are kept at a subsidised price by the Government.  Certain other everyday commodities such as butter, sugar and cereals can reach quite high prices.” Which still is the case in 2019, but without the Government subsidised food. 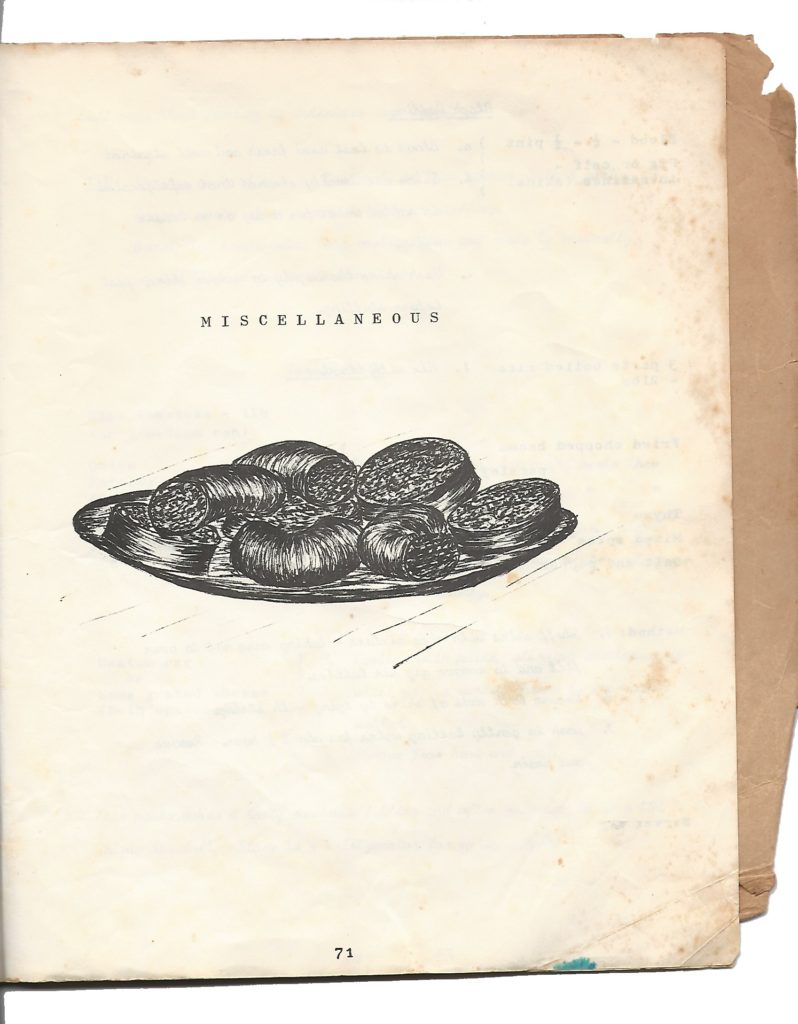 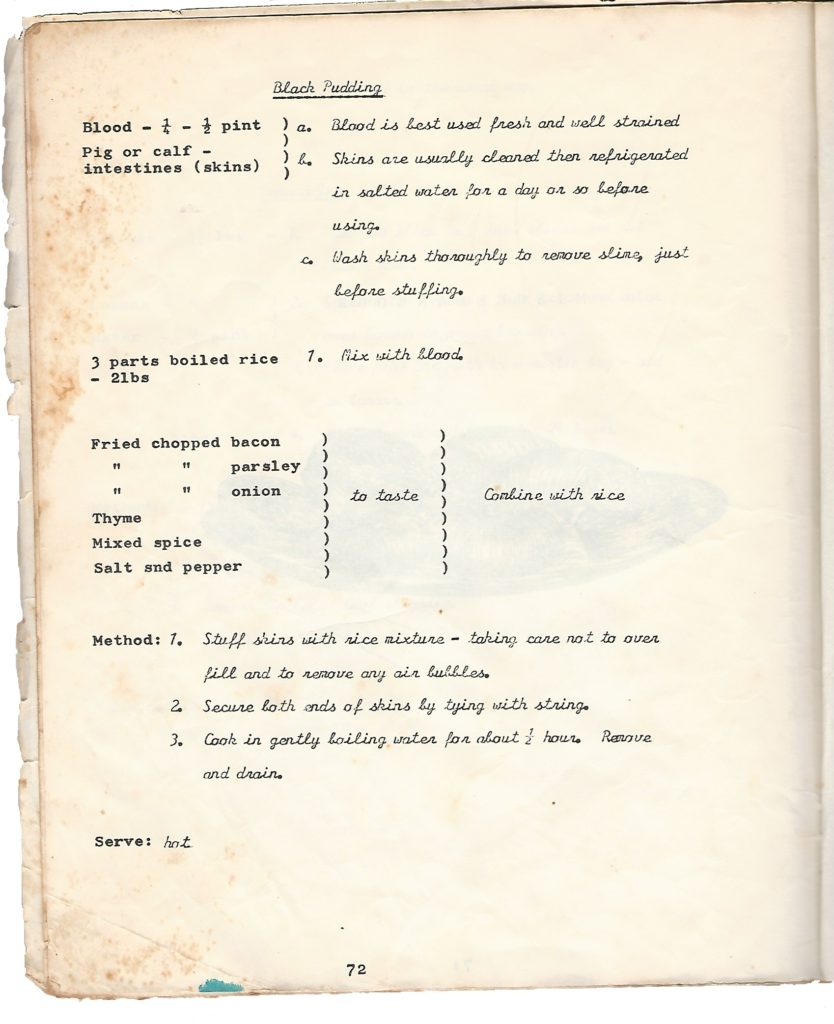 Covers the Diet and Health and Nutrition on the island.  It begins with the Diet and Health which mentions that “In 1980, 50% of the total average weekly expenditure per average household on St Helena was spent on food” and that “St Helena is too small and people too closely-related to knowingly allow anyone to experience extreme hunger.” which says alot about the St Helena community.   It also mentions fish and rice being the staple food of the island, with fish prices having “escalated over the last five years by over 200%” but still cheaper when compared to meat.  Listing 1 lb of frozen Chicken at £1.04 vs 1 lb of Tuna Steak at £0.45 or 1lb of Mackeral at £0.24.  Stating that Cabbages and Carrots are most frequently available, and canned varieties making expensive substitutes, which again is still the case in 2019.

The Nutrition section of chapter 2 is the longest outside of all the recipes listings.  It covers the basics of Nutrition and why it is important.  Whist offering insights into St Helena nutrition at that time.  Stating the dietary habits of island as “Total food energy is derived primarily from carbohydrate rather than fat or protein sources…Cereals, bread particularly, provide most protein…Vitamin C derived from fruit and vegetable is relatively low.”

It also mentions how prevalent diabetes is on the island.  Again still an issue in 2019.  Stating the “diabetes on St Helena is largely diet-induced”.  Miss Lawrence then goes on to break down what causes diabetes, while offering suggestions on how to help prevent diabetes within the community. One thing of note she mentions is not giving babies and infants added sugar.  She suggests to “stop adding sugar to infant feeds…dipping a crust of bread in sugar before giving it to a child…dipping the dummy teat into sugar” I only have a vague memory of this, and maybe this book helped to highlight this and prevent it happening over the years.

Chapter 2 also discusses the lack of vitamins in the local diet, mainly down to the lack of fresh fruit.  Miss Lawrence then provides practical suggestions for how to include more vitamins in your diet.  There is a small table on how long to pressure cook vegetable for, as not to overcook them and reduce the vitamin content.  Included are some delightful illustrations about how to preserve the vitamin content within potatoes, and how to make jacket potatoes.  Also a warning that “adding bicarbonate of soda to cooking vegetables destroys its Vitamin C content”.  Which is something I remember people doing on St Helena.  For the rest of the chapter Miss Lawrence discusses Vitamin C and how to get more into your diet. 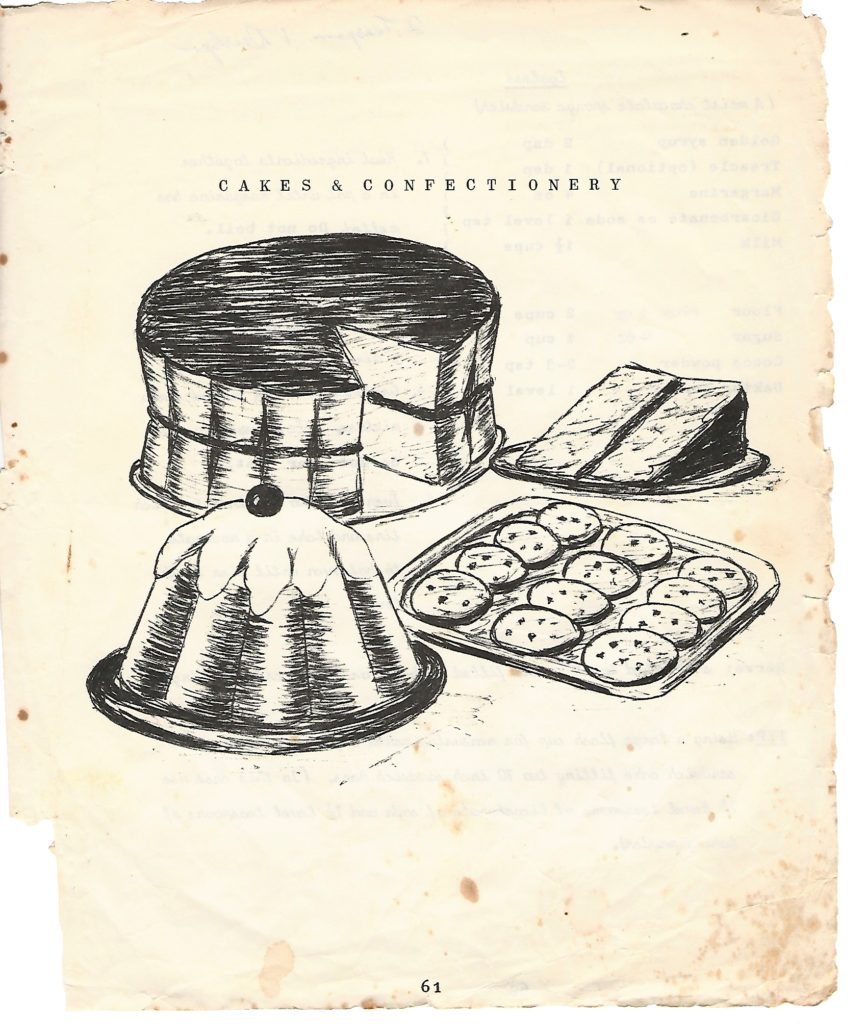 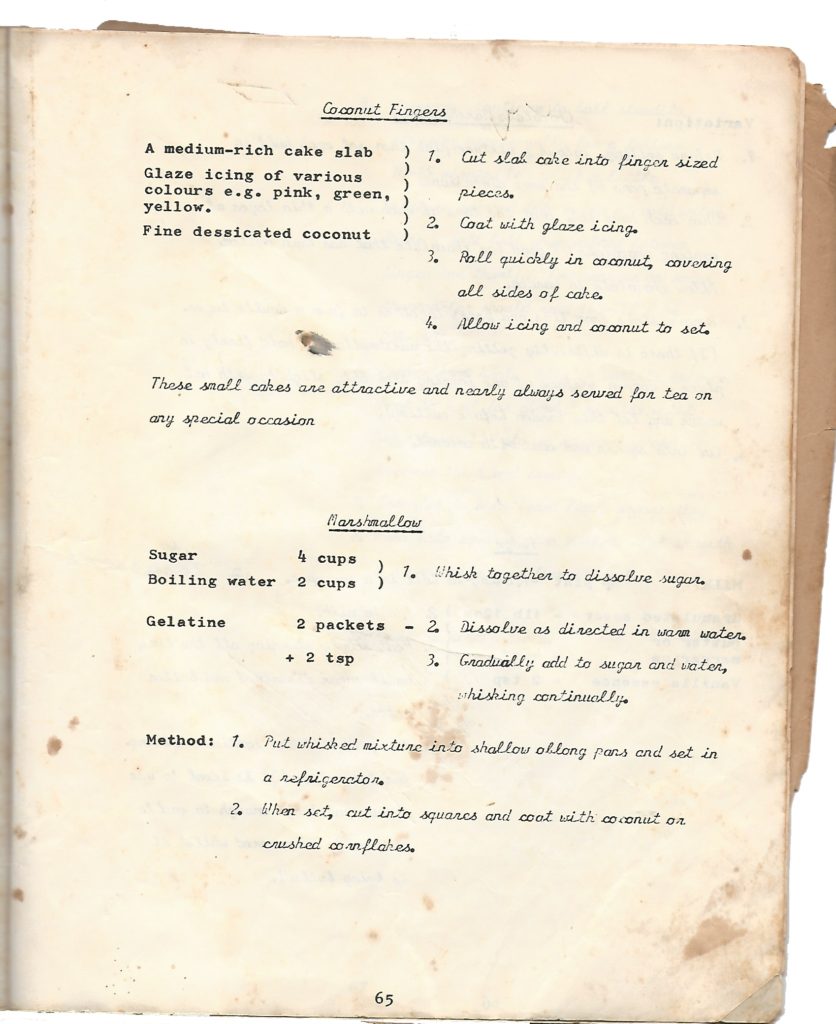 Is about St Helena traditional cooking.  It gives some background into the type of food people cook on island, and peoples eating habits. “Dishes have little regard for status or affluence.  From the richest to poorest persons, fishcakes, curry, black puddings and tomato paste are prime favourites” is just a lovely passage, and so true.  Covered are various eating habits like when people have their meals – one cooked meal per day, mostly at lunchtime (but depending on work and school).  Fish eaten mostly in the week, with meat on sundays.  Dessert not being an essential part of the meal.  With most traditional cooking being fried or half fried and steamed.  With little tendency towards snack meals. 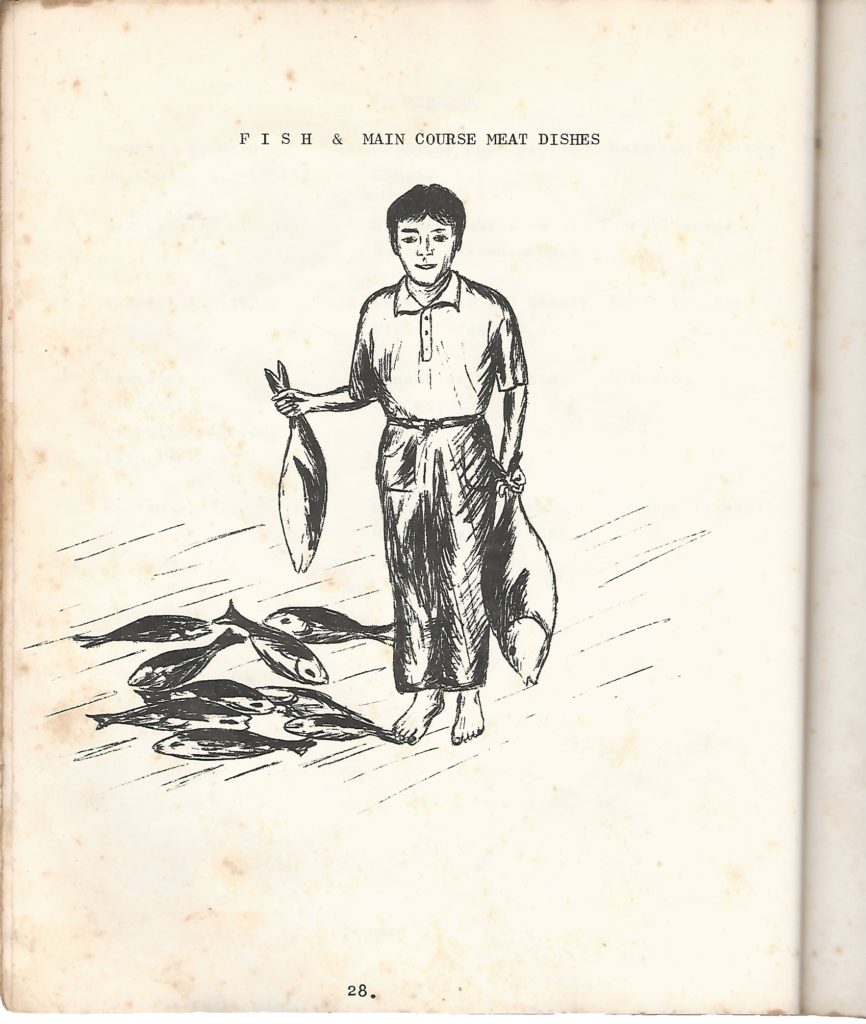 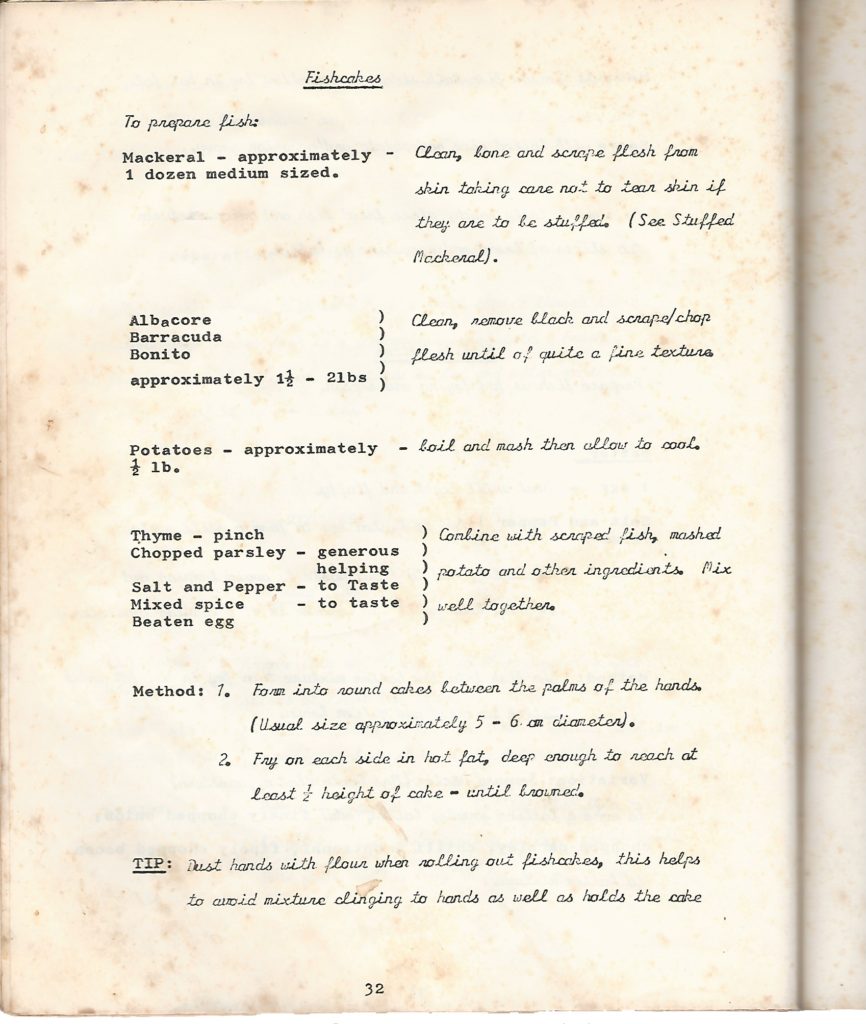 Includes what type of fish is mostly eaten on St Helena – Mackerel, with other fish like Albacore, Barracuda, Bullseye, Jack and others as examples of seasonal fish.  Miss Lawrence also includes flavouring and preparation suggestions. The included fish recipes are: Fried Fish, Fish in Batter, Fishcakes (with variations Fish Balls and Fish Pudding), Stuffed Mackerel, Fish Plo, Fish Mince, Fish Chutney, Poke Mince, Stuffed Pokes.  All of these are traditional St Helena Dishes that are still cooked today.  The recipe for Fishcakes is amazingly detailed and precise, makes it seem easy to make them.  It is not easy, and can be tricky to make Fishcakes.

Like the fish section, there is an intro to meat consumption on the island.  Talks about Beef, Mutton and Pork being the most commonly available meats, with Goat mutton and Rabbit being a traditional island delicacy.  Along with local meat breeders selling meat door to door. There is only one recipe included in this section – Chicken Curry.

These are traditional island made drinks.  They include: Syrup, Gingerbeer, Orange Crush, and Beetroot Wine.  Can remember the local syrup being quite sweet, but oh so good.

Recipes included here are all the things remember and loved growing up with.  Included are: Eggless, Boiled Pudding, Salt Fritters, Coconut Fingers, Marshmallow, Chocolate Marshmallows, and Fudge. Interestingly for the most popular St Helena cake, the Coconut Fingers recipe is probably the least descriptive recipe in the book.  It is missing how to make the slab cake and any tips for making the fingers.  Salt Fritters is a new recipe to us that we will have to try.

Including only 3 recipes: Everyday Beetroot Vinegar, Plum Jam, and Banana Jam.  Banana Jam is something we have to try.  Also would like to highlight how many Beetroot recipes are included.  Either Miss Lawrence likes Beetroot or it was more popular in 1984 than is it now.

The final recipe section included local favourites: Black Puddings, Tomato Paste, Potato Gravy, and Brown Onion Gravy.  The Tomato Paste includes Bacon which Emma-Jane doesn’t like in hers’, but makes it taste better.  Which is something we discuss at length every time we make some Tomato Paste.

The book concludes with a small Glossary and Measurements.

This is the best St Helena Cookbook we’re seen.  The recipes are clear and honest in their approach, using simple and easy to find ingredients.  Combined with the insights into island life, and illustrations it is a most delightful cookbook.

It’s a shame it is no longer in print.  We hope Miss Lawrence might consider re-printing it.  We for one would love to see it available again, and if there is anything we could do to help make that happen, we’re be very happy to help.